I don’t often write about parenting. Its not because my children don’t occupy eighty gorgeous (mostly:-) percent of my life and thoughts, but because I’m still very much finding my feet as a parent.  I’ve not got that much parental wisdom to impart.  Yup, even after seven years.

Before having my own children, very much wanted, I found children to be distracting and annoying. So not a natural maternal figure, by any measure!

Like most mums I get stabs of mother’s guilt. Is the fact that my son’s dietary mainstay salami wraps a problem?! Am I the reason my son likes to hibernate into video games?!  Has my daughter become prickly in the mornings due to my emotional over-indulgence?  Why does my five year old leave trails of where she’s been all over the house with discarded food wrappers, damp towels and strewn markers on the floor ? Am I, as a parent, too loosey- goosey?  Are my children too self-absorbed, spoilt even, and what would their Grandpa say about their, at times, eye-widening table manners?!

Mommy-guilt is something that pops up in conversation a fair bit. We fret about working too much, yet on the other end of the spectrum ‘just being a mum.’ (Which, by the way, I think silly, being the most challenging, non-stop job out there.)  Fellow military/nomadic parents worry about moving our kids around too much, forcing them to address great change at such a vulnerable age.  But then that could be seen as a good thing, too, and some mom’s regret that their children don’t get cultural exposure.  And, as you know, the mothers-guilt- list goes on…and on, oftentimes contradictory to the next mom but usually always gripping us in seizures of not feeling enough for our kids.

Mum’s guilt is what I like to think of as mothers conscience, her desire to do her very best for her babes. I think I’m going to take that word ‘should’ right out of my dictionary, especially in application to parenting.  We mom’s come in all different flavors.  Just as well, our kids do too.  There isn’t just one way to raise a child.

I won’t hinge my mummy-worth on my son’s hair being overgrown and muzzy for school, whether there’s toothpaste on his t-shirt, or pen scribbles on my daughter’s fingers.

Much of the stuff that we mum’s mentally fester about is not important. Not only that, but it distracts us from really being there with present awareness with our children, with our minds whisking us off to another place.

‘If it doesn’t bother our kids, should it really bother us?’

Children just want our love and the time and sense of security that love carries. They really are quite simple creatures, relishing the same delights children have for generations: cardboard boxes, tumbling down grassy banks, tottering around in mummy’s shoes, climbing trees.  We complicate parenting far more than ever, because our culture is far more complicated than ever.

This Mothers Day was extremely special. I was Yoga Teacher Training all weekend at the studio.  Alex and Sophie, with Daddy, came bursting in mid-pigeon pose, with a lovely mothers day message for me.  Later on arrival home, they had prepared dinner, and graced the table with roses and a pile of homemade cards and school-made gifts. 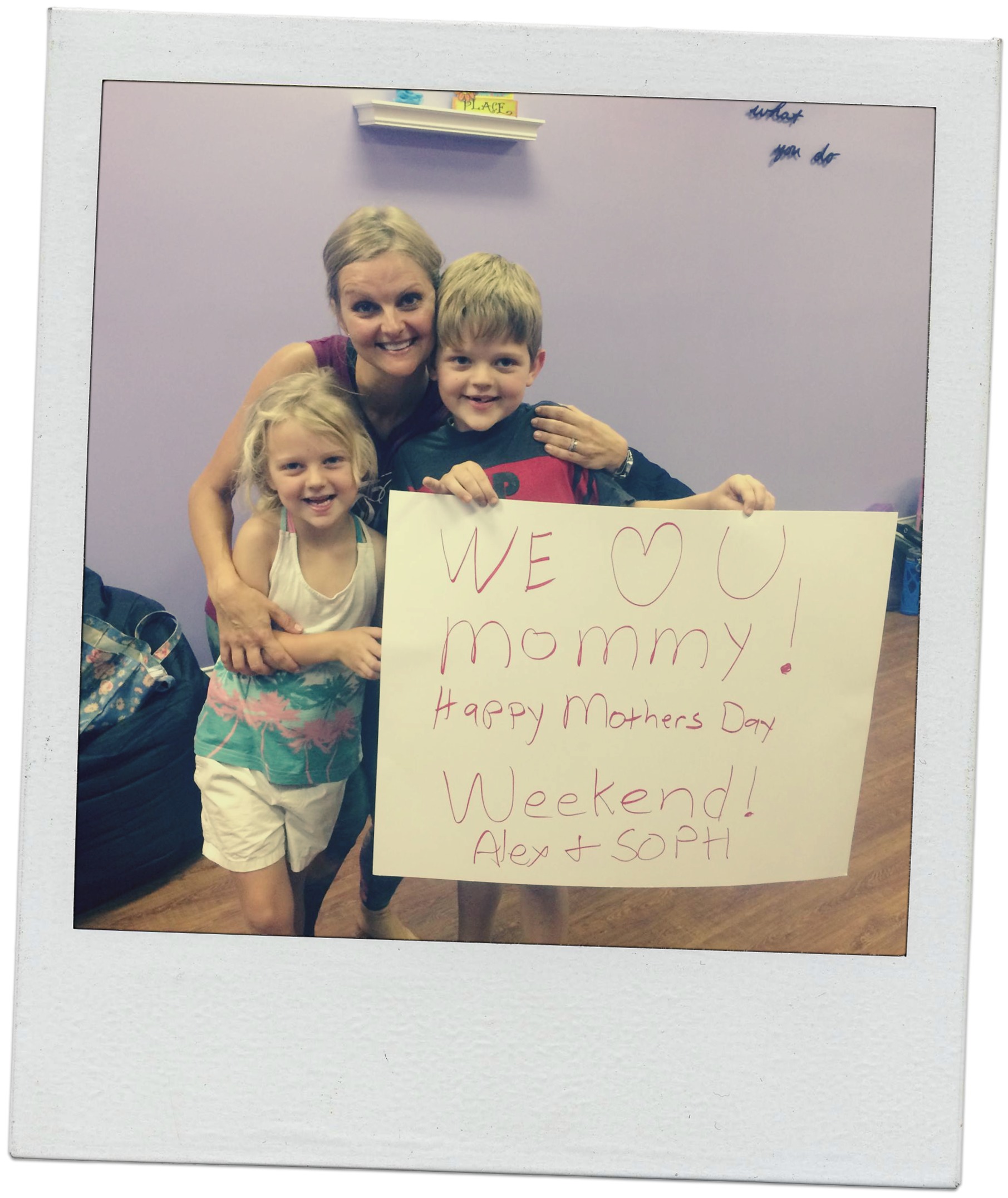 At seven and five years, mothers day sentiments and efforts came from them. Not cards drafted by daddy and acts prompted by his sweet suggestions.  Its a big feeling, receiving unfiltered love.

Misty-eyed I read love notes and perfectly clumsy words of adoration, scraped from the limited wells of their vocabulary.

I’ve become like my mum, who thinks the worth of a sentimental card plucked from the heart tenfold of a shiny gift.

As I squeezed my kids this mothers day, smooching cheeks and basking in gratitude for the gift of being a mum, I realized something.

They’re happy kids. Their eyes are round and bright, their days often carefree and they hold so much love and affection in those wee bodies that it spills out abundantly to all they hold dear. 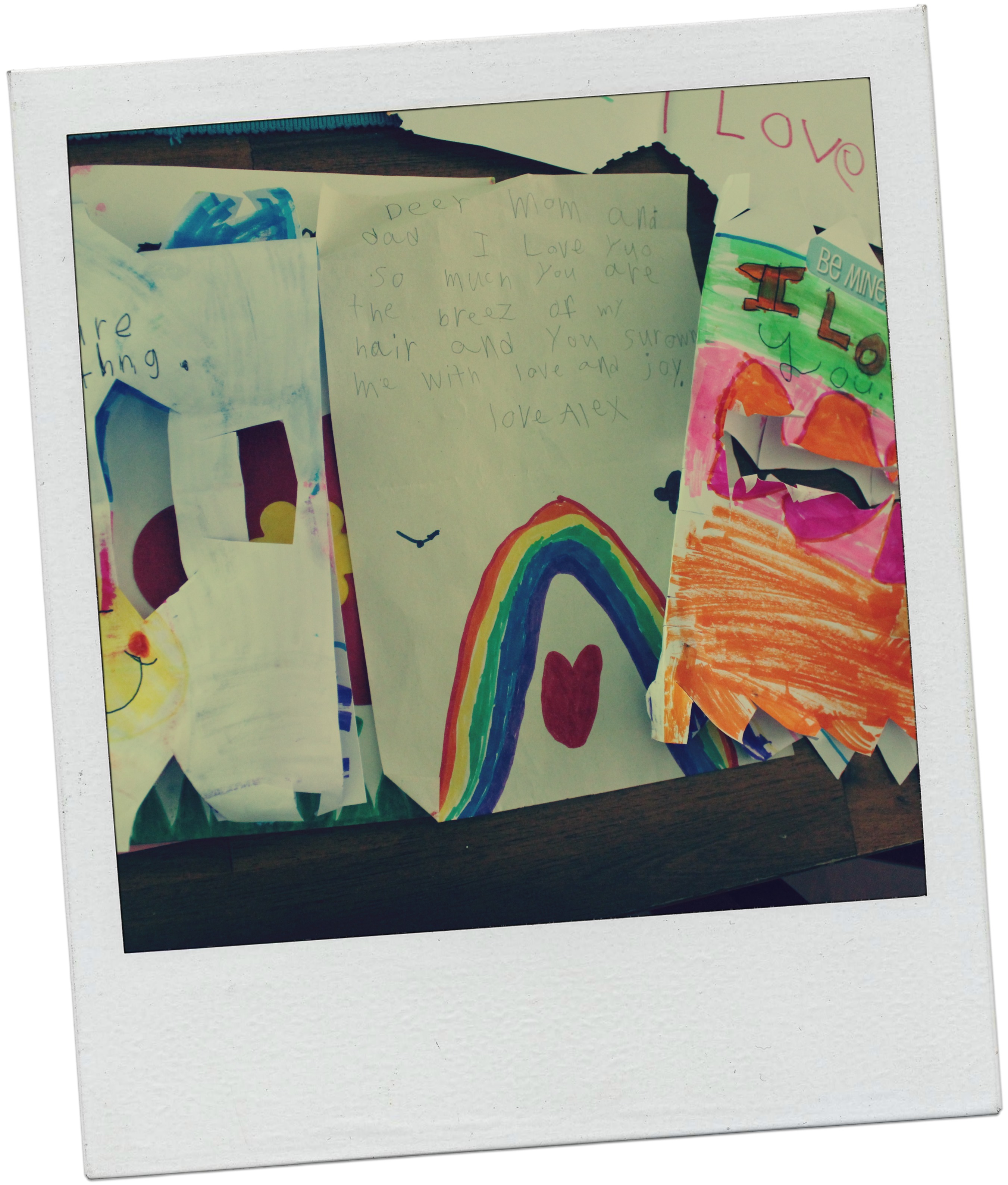 I prize their joy above all else. We all wish that for our kids, don’t we, ‘I just want them to be happy.’  Life is such a precarious journey, pain will find us all, but I for one mummy will bow my head in quiet appreciation of their happy little spirits this mothers day.

I hope you know your irreplaceable value as a parent. We all doubt, we all despair, but- excuse the corny rhyme- its because we care so very much.  And that’s our gift as mums.