This is actually an intimidating prospect, to try and represent a man via clunky keyboard and swirling authored mind on this blank post page. A man who was so rich in character, so beloved, so intricate. Even the word ‘man’ falls short. A great teacher of our time, Avatar even, or Angel?

Dr. Wayne Dyer was born in 1940 and had a very challenging childhood after he and his brothers were abandoned by their alcoholic father and subsequently part raised in foster homes. Despite his formative years, he molded the clay of his childhood into a model of hope, inspiration and love. Whilst streamlining light, bright positivity and gratitude as if from the heavens above he simultaneously impressed our hearts with his aptitude to give anyway, to serve anyway, to love anyway, to believe the best anyway. He unfurled quite stunningly into the great yet relatable and household self guru we all hold dear. His first book was published in 1971 and for forty years since he’s graced us with thirty more. Dr. Wayne Dyer captivated audiences of thousands at speaking events all over the world. In fact, sadly, I was looking forward to catching hopeful glimpses of him later this month at the Hayhouse I Can Do It Conference in Orlando, FL.

He had that oozy, mellow and soothing voice, fatherly in effect, like chocolate to my soul at least. Dr. Wayne was always so engaged, so passionate about what he was delivering, so raw and real and unadulterated by ego or mind or self interpretation. Because his words came from his Source they burst into resonance as they flew into our Soul Space too.

His physical form may have left us but his messages are ever as indelible, etching their truths into the fabric of our media sources for ours and every generation yet to come to relish and to grow from.

Its impossible to know and scribe his greatest lessons, because what sings to one heart is lost on another. And, indeed, there were so many of them, thirty books worth. Yet here are just some to remember Dr. Wayne Dyer by…

1) Even those who wound you deeply come to teach our soul lessons, to expand you rather than to contract, despite this usually not being on a conscious level. These personified challenges are oftentimes the most effective teachers. Learning to forgive is a powerful lesson they confront us with. It was clear how deep of a mark his father made on him in his book My Greatest Teacher. Their relationship-or lack of- made room for Wayne to experience the potency of forgiveness on a life. He turned from the early rage that had wrestled with his happiness to, in 1974, forgive his father.

“Forgiveness sets you free to move past the pain and on into a life of loving and serving.”  Wayne’s Blog: My Greatest Teacher

I’ve often thought, if Wayne can forgive all that, there’s nothing stopping me from letting go of lesser claims to blame. 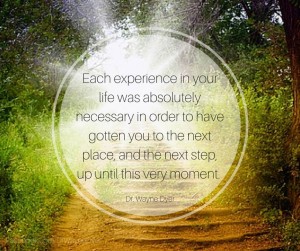 2) Dr. Wayne Dyer was as seemingly excited, moved and inspired by other contemporary spiritual teachers as the next person. Dr. Wayne exemplified his belief that there was enough for everyone, that competition was bred from fear and scarcity and that was not his interpretation of life. He subscribed to abundance. Not only did he support but heralded, befriended and loved other people in his industry. This, I’m sure you’ll agree, is a rare and beautiful thing.

One of his later books, Co-Creating at its Best: A Conversation Between Master Teachers, co-written with Esther and Abraham Hicks illustrates this in a bow- tied package. Wayne seemed as enamored, as humbled and as marveled by Abraham and Esther as the most wide-eyed spiritual journey newbie. I remember listening to his schoolboy curiosity at Abraham and thinking; its as if he’s forgotten he’s one of the greatest gurus we have on the planet today too. It takes an extraordinary soul to embrace his own inner student in the very subject-self help, in this case- that he is teaching.

Wayne also recently championed Anita Moorjani and her book, Dying To Be Me. She-like Wayne- had cancer and after a battle seemingly had no choice but to succumb to it taking her into death as her organs stopped their functions and she lay comatose. Incredibly she had a sublime near death experience and thereafter re-entered her body and fully recovered; without, staggeringly, any further medical intervention. Wayne knew the implications of such a story on war-weary hearts. He did everything he could to make sure her miraculous journey was given the platform to reach those who needed the courage and hope it carried. His beautiful foreword of that book made it quite the anticipation.

If individuals, families, businesses, communities, religions, countries and indeed any other framework of people could latch on to even the threads of Wayne’s lead and make room for others to Be, even if the ego saw them as a threat, then surely fear-born hatefulness and all its unconscious actions would fizz, like Asprin into water, and dissolve away the headaches and hurts that are wounding our world.

3) Dr. Wayne allowed his teachings to come through him, not from his ego. This is the reason he wrote and taught so much, despite his leukemia diagnosis. It was as if he was a conduit to a Higher Source, and that Higher Source wasn’t done with him because he hit retirement age, or got sick. It wasn’t his living, it was his joy, his passion and to let go of giving what he felt moved to deliver would be to let go of life itself.

“It’s just being bewildered—being in that state of pure awe. When I’m on purpose—when I’m allowing Source to come through—it’s always there. At those times, I’m not focused on any ego sense about how much I’m going to make, how well a book is going to do, whether people are going to buy it, or any of that. I just go to a state of awe and gratitude—I’m deeply, profoundly grateful—and it just works. The first words out of my mouth every morning are “I thank you.”

He goes on to say…

For years I taught in universities and high schools for classes of 30 or 35 students. Now I teach in very large venues with thousands of people in the audience. I used to have notes. Now I just let go and let God. I just allow it to come, and I didn’t do that before. I never even used the word “God” for twenty or twenty-five years. Now it just rolls out of my mouth all the time.”  Wayne’s Blog: You Are God

How gorgeous, how heroic even to work from our vulnerable hearts, which are usually seen as too irrational and unrealistic to credit and trust, and not our heads, which successfully bully most of us into doing things their logical yet self- preserving way. Wayne must have triumphed over the mind’s gnawing self doubts, frets and fears in canvassing himself in such an exposing way.

His evidenced belief in the Source of his inspiration fostered our reverence at its message. 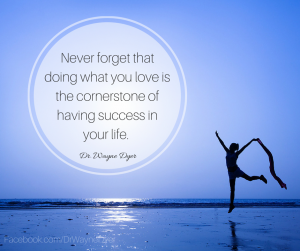 Just Gosh. Gosh how much one life can gift so many; like ripples cast from a stone. Dr. Wayne, if you’re listening, thank you for the years of service. Thank you for showing us what we’re capable of, perhaps that being the most esteemed hallmark of your life to those who didn’t have the pleasure to personally know you.

I imagine you marinating in the highest expression of Love that even you have sought to believe awaited:  Well-deserved.

We’ll see you there, Buddy.  Namaste.