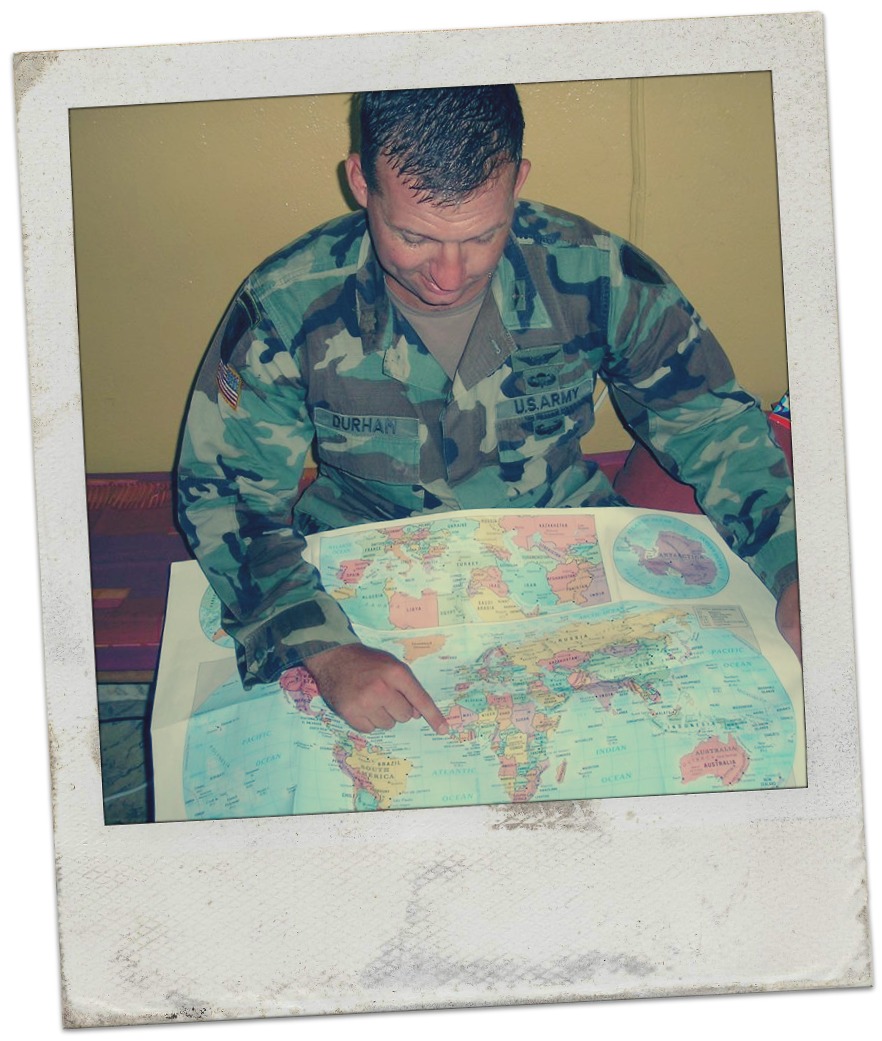 Nigh ten years ago to the day, my husband and I met in a bar.  This is the typical meeting venue for a kaleidoscope of hearts to bump into fateful new unions. But this place was a little different.  We met in the Lungi Airport Hotel in Freetown, Sierra Leone.  A care package from the US Army, Eric was there to help train Sierra Leone soldiers.  He was part of the International Military Advisory Training Team.

Myself and my raucous aircrew, made up of we five Flight Attendants and two parental Pilots, were there to have a jolly holiday. We had a penchant for doing so in any random or desolate place our obscure airline chose to down- route us in.  The days saw us strewn out on pool loungers, topping up tans, reveling in airline gossip, local beer in hand.  The evenings were more of the same, with the addition of glad rags and stronger alcohol.

“Can I buy you all a round of tequila?” was probably the best question you could approach we crew with.  And that’s what Eric did.  As the night stretched out, our particular chairs and conversation drew closer.  He was exotic and so stunningly self-assured and charismatic.  Our put-the-world-to-rights chat hung from American Literature to President Bush.

Love took weeks, if not days to arrive in both our hearts, buoyed by frequent trips to visit, care of my airline. We lived like Kings out there.  We ate at the finest Freetown restaurants, hugging coastlines, we drank flavored vodka on his barracks balcony till early morning.  We took date-days to donate school supplies to orphanages, fire rounds at shooting ranges and we boat-rode into history to a haunting slave route island. 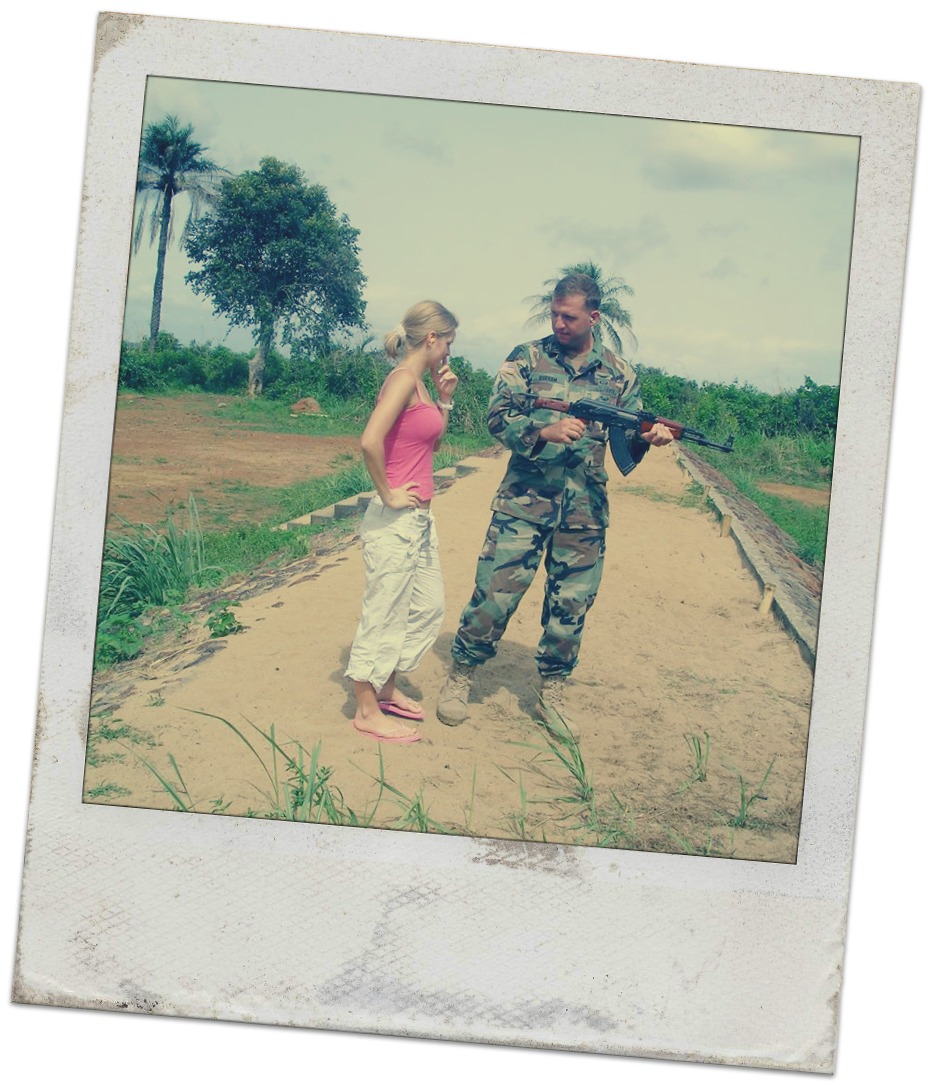 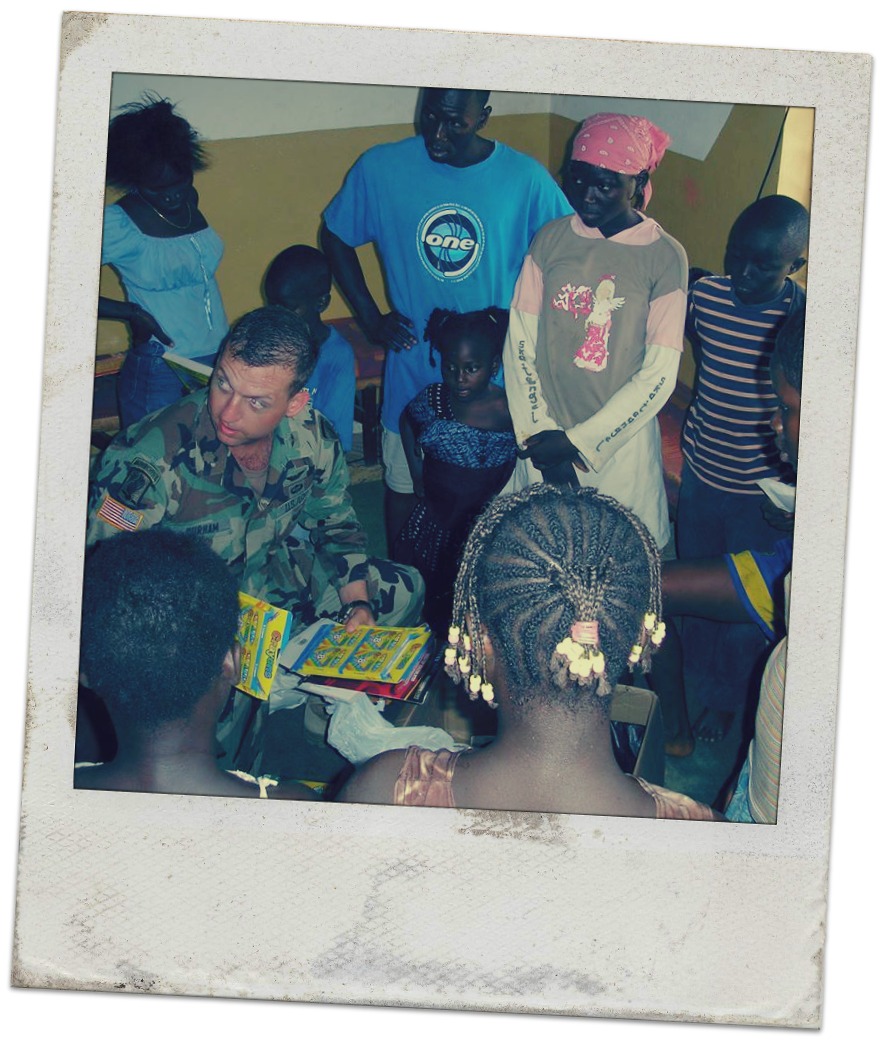 Even then, with my gung-ho brain, I couldn’t see how our lives could merge. But the relationship persisted. He visited my parents in Dorset, England.  They were puff-chested about their daughter dating a US soldier, ‘specially after all my previous boyfriend choices. We then visited his mom in Orlando, FL.  And it was there,  over burger and chips in a Disney World restaurant, that we said ‘to hell with it, lets move in together!’  Neither of us had sensibility nor much rationality going for us.

My job was hard to relinquish. I loved it.  But I loved Eric more.  I moved into his apartment, mit zwei cats, in Germany in 2006.  Mum, dad, me and my packed little Ford KA trudged down there over two days. Germany was a much shorter bridge to take me back to the UK than crossing the Atlantic, so Eric and I muddled through my homesickness, with me taking therapeutic trips home to family and friends for a reassuring bit of normality.

Over a Dorsetian church aisle a year later we said ‘I do.’ Our son- in our frenzy of love- decided to announce his incoming arrival on a pregnancy stick, during a Key West honeymoon.  Sophie followed two years later.

Its only now we’ve left the nomadic wanderings of Army life and are playing roles of grown- up mortgaged civilians in Florida that we’ve had the opportunity to gasp for air and say, ‘wow, look what we’ve done.’

We paid a high price for our love. Its definitely not all sunshine and margaritas.  I’m often reminded in emotional waves of how I’ve ripped apart the familial fabric back home.  Rites of passage visit my mum, dad and sisters and I have to make hard decisions as to which to return for.  Dad died last November, as you know.  That was a no-brainer decision as I boarded a flight back to London ASAP.  Yet we have no immediate plans to visit my niece, due to arrive in our world next month.

Raising babies in a cross-cultured marriage is not always plain sailing. You may want exotic for your own wee racy heart, but our human nature tends to want nostalgia for ensuing offspring.

Eric and I are pretty good at merging our respective heritages into our children amicably though. In other words, he mostly lets me get my own way:-)  Seeing as we live in America, and my children can’t even fake a British accent (attempts to do so around the dinner table are a favorite family pastime) we adopt British traditions instead.  Christmas is not spent with a BBQ at our local beach, despite how hot the weather man says it is.  We pretend its cold and opt for a traditional Christmas, Queen’s Speech inclusive.  We also watch British TV, Eric not being bothered either way.  Some of our British traditions Eric implements, like a Sunday Roast.

Ten years on, and of course, much of the fizz of our early years has made way for a work-centered American lifestyle. I often hark back to the UK, the home of my heart, as I tried to comically illustrate in

You Know You’re A British Expat Living In America When…

Yet, I don’t regret any of this decade’s dervish madness. Eric has taken my entire world and plopped it somewhere so much better than even my sparkly childhood dreams imagined.  I’ve grown a lot, amid the accepted feeling of his love.

As such, I’ve always said just go for things in life.  The bravest decisions come with the biggest challenges, yes, but also the most precious rewards.

I never dreamed that I’d be lucky enough to excavate an infamous diamond in Sierra Leone.  But that’s exactly what my Eric is to me. Happy Ten Years, Love.